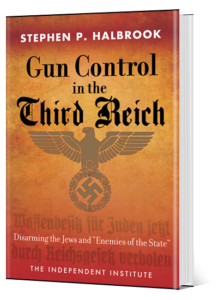 Gun Control in the Third Reich: Disarming the Jews and “Enemies of the State”

Published by The Independent Institute (2014)

Based on newly-discovered secret documents from German archives, diaries, and newspapers of the time, Gun Control in the Third Reich presents the definitive, yet hidden history of how the Nazi regime made use of gun control to disarm and repress its enemies and consolidate power. The countless books on the Third Reich and the Holocaust fail even to mention the laws restricting firearms ownership, which rendered political opponents and Jews defenseless. A skeptic could surmise that a better-armed populace might have made no difference, but the National Socialist regime certainly did not think so—it ruthlessly suppressed firearm ownership by disfavored groups.

Gun Control in the Third Reich spans the two decades from the birth of the Weimar Republic in 1918 through Kristallnacht in 1938. The book then presents a panorama of pertinent events during World War II regarding the effects of the disarming policies. And even though in the occupied countries the Nazis decreed the death penalty for possession of a firearm, there developed instances of heroic armed resistance by Jews, particularly the Warsaw ghetto uprising.

Part I: Dancing on a Volcano: The Weimar Republic

“Stephen Halbrook’s meticulous research in Gun Control in the Third Reich sheds new and revealing light on the consolidation of Nazi power and the prosecution of the Holocaust. Everyone, including advocates of gun controls, should find this pioneering and thought-provoking book essential reading.”

“Stephen Halbrook’s Gun Control in the Third Reich provides a stark example of why defenders of liberty must oppose any attempts to limit our ability to defend ourselves from private and public criminals. Halbrook’s work is especially timely since so many in Washington are once again trying to convince the people they have nothing to fear from gun registration and other infringements on our Second Amendment rights.”

— RON PAUL, former U.S. Congressman and candidate for President of the United States

“Gun Control in the Third Reich: Disarming the Jews and ‘Enemies of the State’ is an astonishing piece of scholarship: complete; careful; thoughtful. […] Halbrook makes use of an astonishing set of sources. His secondary sources are impressive. […] Halbrook goes far beyond that, however, with an impressive collection of primary sources, including diaries by people who lived through the time, surviving police records, internal government memos, and court decisions.”

“Gun Control in the Third Reich is Stephen Halbrook’s best book. He shows how the destruction of gun ownership, gun clubs, and self-defense was part of the National Socialists’ extermination of civil society, individualism, and the Rule of Law.”

“‘Gun control caused the Holocaust.’ That’s an argument, rather unhelpfully phrased, that American gun-rights supporters have been making for decades. […] Are we talking about a world in which the Nazis behaved exactly the way they did, but inexplicably allowed their victims to remain armed? A world in which, as the Nazis came to power, Germany already had a widespread and passionate gun culture like America’s? Unfortunately, this bold assertion obscures very serious questions about the role disarmament can play in oppression. And at last we have the historical information we need to investigate those questions, in the form of Second Amendment lawyer Stephen P. Halbrook’s Gun Control in the Third Reich. It is the most extensive history to date of Nazi Germany’s policies on firearms, drawing largely on original documents. […] It is hard to deny that these incidents would have been more plentiful if Germany had been more protective of gun rights over the preceding two decades. Would that have merely nudged the balance slightly in the right direction — a few dead Nazis, a few Jews saved from the concentration camps? Or could it have meant something more, in the context of 6 million people put to death? The answer is lost to history. The broader lesson of this book should not be: As the American Founders suspected, civilian disarmament and tyranny often go hand in hand.”

“Gun Control in the Third Reich, Stephan Halbrook’s extensively documented account of gun control under Nazi Germany, shows how gun control was used to keep guns out of the ‘wrong’ hands, mainly Jews. Much of the discussion these days regarding registration focuses on the claimed ability to trace crime guns. There might be no evidence of registration’s success in doing that, but Halbrook slams home the success that registration had in tracing the guns of law-abiding politically undesirable citizens, so-called ‘enemies of the people.’ Americans in even modern cities such as New York can see how discretionary licensing on who can own guns keeps blacks from owning guns, but Germany paints a picture of how discretion was used to disarm Jews and others considered undesirable. Among the many chilling discussions is how German Jews were systematically disarmed just weeks before the Night of the Broken Glass (Reichskristallnacht). Ultimately, however, just as Americans have recently learned about their IRS tax records, Halbrook shows that no one can really guarantee promises that information on gun registration will never be abused.”