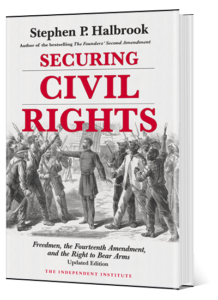 (Originally published as Freedman, the Fourteenth Amendment, and the Right to Bear Arms, 1866-1876)

Whether newly-freed slaves could be trusted to own firearms was in great dispute in 1866, and the ramifications of this issue reverberate in today’s “gun-control” debate. This is the only comprehensive study ever published about the intent of the Fourteenth Amendment and of Reconstruction-era civil rights legislation to protect the right to keep and bear arms. Indeed, this is the most detailed study ever published about the intent of the Fourteenth Amendment to incorporate and to protect from State violation any of the rights guaranteed by the Bill of Rights, even including free speech. Paradoxically, until the Supreme Court’s decision in McDonald v. Chicago (2010), the Second Amendment was virtually the only Bill of Rights guarantee not recognized by the federal courts as protected by the Fourteenth Amendment.

“Halbrook touches two hotly contested issues in American constitutional history. It is a contribution to both the Second Amendment debate and the incorporation controversy over the extent the Fourteenth Amendment applies the Bill of Rights, and especially the right to bear arms, to the states. . . . Halbrook has written a book that contributes significantly to our understanding of the linkage between the Second and Fourteenth Amendments. Although his primary concern has been to bring back the Second Amendment from a moribund state in American jurisprudence, Halbrook’s efforts also shed considerable additional light on broader questions.”

“In the aftermath of the Civil War, there was an outpouring of discussion of the Second Amendment in Congress and in public discourse, as people debated whether and how to secure constitutional rights for newly free slaves. See generally S. Halbrook, [Securing Civil Rights:] Freedmen, the Fourteenth Amendment, and the Right to Bear Arms.”

“In his thorough analysis of Congressional debates Halbrook makes quite clear the point that the framers of the Fourteenth Amendment saw Second Amendment guarantees as essential to the political liberty of the individual American citizen.”

“The Heller Court also analyzed post-Civil War case law and commentary to conclude a key purpose of the Fourteenth Amendment was to ensure freed blacks had the right to keep and bear arms. Id. at 2810-11; see generally Stephen P. Halbrook, [Securing Civil Rights:] Freedmen, the Fourteenth Amendment, and the Right to Bear Arms.”

“[Halbrook] provides overwhelming evidence that the Fourteenth Amendment was meant to protect the right of individuals to be armed and that this particular right was a major concern of its framers. He offers scholars in the field a wealth of quotations from the historical debates. . . . Above all, Halbrook helps restore the historical record of a badly served constitutional amendment.”

“Halbrook’s book demonstrates that many proponents and opponents clearly understood that the Fourteenth Amendment would impose the first eight amendments as limitations on the states. Halbrook does an impressive job of gathering evidence not only from the speeches of Bingham and Howard before, during, and after ratification of the Fourteenth Amendment, but from a variety of other members of Congress, from newspaper coverage, and from law books of the day.”

“This is a second edition of Halbrook’s 1998 book, one that has been quoted in the Heller decision and stands to be even more pivotal in the McDonald case . . . . Halbrook marshals impressive evidence that those who advocated the 14th Amendment quite specifically understood it to protect the rights of former slaves to keep and bear arms. They also understood the purpose of keeping those arms was to resist the KKK and other groups seeking to maintain white supremacy. Future Supreme Court decisions sided with southern state governments who intended the opposite, a distortion we can hope the McDonald case will rectify.”

“[T]his is a valuable book that should be useful to those who claim to take the Constitution seriously. . . . Halbrook is a talented and indefatigable advocate in the cause of firearms rights, who reads the evidence for all it’s worth, and sometimes more. . . . Halbrook’s evidence seems quite adequate to establish that if the Privileges or Immunities Clause was meant to incorporate the substance of any of the individual privileges and immunities in the Bill of Rights, it was certainly meant to protect the individual’s right to keep and bear arms.”

“We receive a lot of books for review, but the timing of Securing Civil Rights (with the pending Supreme Court decision) and its unique content set it apart. In a nutshell, the book argues that the right to keep and bear arms applies to states: Since the Supreme Court is to rule on the Second and Fourteenth Amendments, the book in part addresses how civil rights are historically tied to the right to own firearms, and it provides some intriguing background. . . . Author Halbrook—an attorney whose list of credentials includes Research Fellow at the Independent Institute, most recently, coauthor of the NRA brief in McDonald v. Chicago—doesn’t beat around the bush when he states unequivocally, ‘The Fourteenth Amendment to the U.S. Constitution was intended and understood to protect basic rights—above all, the right to have arms to protect life itself—from infringements by the States and localities.’ And here’s Halbrook’s take on the upcoming decision: ‘If [the Supreme Court decision is] favorable, gun owners in every state will be able to challenge onerous firearm bans, such as the semiautomatic rifles mislabeled ‘assault weapons,’ as well as total prohibitions on the bearing of arms. Where discretionary carry permits are routinely denied, recognition of Second Amendment rights will promote procedural due process.’ And I had to ask: ‘Are these decisions the most important Second Amendment issues addressed in our lifetime?’ ‘Absolutely, yes,’ Halbrook replied. ‘The pillars of serious recognition of the fundamental right to keep and bear arms are twofold. First, it is truly a ‘right of the people’ and not an exclusive collective power to maintain a militia. Second, it may not be infringed not only by the federal government, but also by states and localities. Future cases will concern how the right may be regulated and may fill in the many gaps that will follow the basic recognition of the right.’ Those comments set the table, don’t they? If you want a good read, visit www.independent.org.”

“As the subtitle explains, Securing Civil Rights is the story of ‘Freedmen, the Fourteenth Amendment, and the Right to Bear Arms.’ Securing Civil Rights details a crucial period in American history that was once obscure, but now, thanks to the U.S. Supreme Court’s decision in McDonald v. Chicago, will be studied by every law student and will be taking its rightful place in the mainstream of American society. After the Civil War, the ex-Confederate state governments accepted the formal abolition of slavery. But many of them attempted to keep the freedmen in de facto servitude. . . . Securing Civil Rights tells this story in careful detail, based almost entirely on records of the time, such as newspaper articles and congressional debates. The book is further buttressed by hundreds of endnotes, supporting every fact and conclusion. . . . Now, the updated 2010 edition from the Independent Institute in California makes the book accessible to a much broader audience. Of the many scholars whose work made the McDonald victory possible, Halbrook was the most influential. When you read this book, you will understand why the Supreme Court finally decided that if the original meaning of the Constitution matters at all, the Supreme Court had the duty to stop local despots like Chicago Mayor Richard Daley from depriving good citizens of their Second Amendment rights.”